HIALEAH, FL- Jose Alvarez is currently completing his 4 year residency in psychiatry at Larkin Community Hospital. His story is one that is full of struggle. He has found his success in life, and as he puts it, wishes to “give back.” 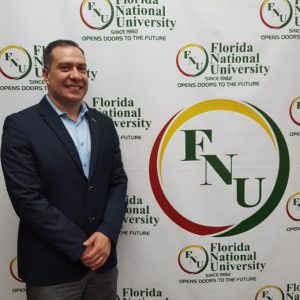 “I’ve been privileged to attend multiple institutions of higher education, and Florida National University (back then Florida National University) has made me want to give back to the people and institution that made me who I am today. I wish to serve as an inspiration to others in a similar situation to myself, who are trying to go to school full time, work, and do their best,” said Alvarez.

Alvarez came to the United States from Cuba in 1992 at the age of 15. “Going to medical school back then seemed like an impossible task to accomplish.” Alvarez sought schools that would tailor themselves to a busy working student. He worked at the time not only a full time job, but a part time job as well. “When I came to FNU, I was working as an admissions representative for a local hospital. I was working the same job at another hospital on the weekends.”

Alvarez continued to explain why he chose FNU, “I think that what makes this school successful is that everybody was very helpful. Everyone was helpful from the financial aid offices to the admissions office. I remember that the dean and everyone knew that I was struggling, so they worked hard to keep me focused so that I could finish and succeed. That is why FNU holds a special place in my heart. It was a difficult emotional time in my life, but educationally it was made very easy for me due to the helpful nature of the environment.”

Jose Alvarez has lived a long life, one full of struggle. There are in his story times of great heights, but also great lows. He has known many great achievements in life, but Alvarez has also known many losses in his life. Despite any losses, he continued to always move forward toward his dreams. After leaving FNU, he found a wife and a calling in medicine. He is now giving back as an inspiration to others on their way to success through struggle by not only speaking out about making it through tough times, but also by speaking out about the support he found at FNU.