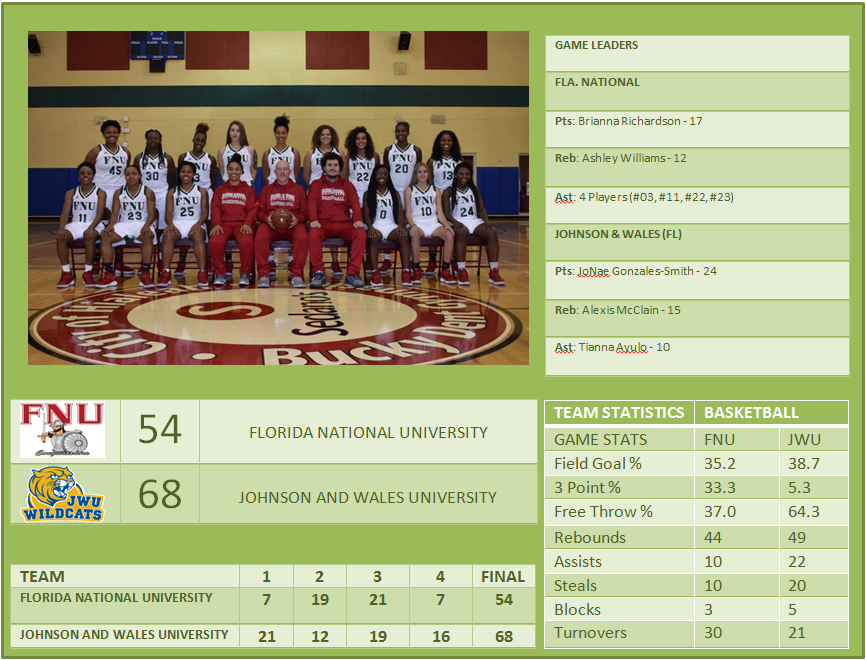 Johnson & Wales (Fla.) women’s basketball team (1-1) defeated the Florida National Conquistadors (3-6), 68-54, on Tuesday evening from the Wildcat Center. Not to be outdone, sophomore Alexis McClain grabbed a career-high-tying 15 rebounds in the team’s first win of the season.Senior JoNae Gonzales-Smith posted a career-high 24 points while sophomore Tianna Ayulo recorded the first triple-double of her career.

Gonzales-Smith shot 11-of-20 from the floor for the fifth 20-point outing of her JWU career. The native of Richmond, California, also added seven rebounds, six assists, and five steals. Auylo scored 14 points on 6-of-14 shooting, grabbed 10 rebounds and notched a career-high 10 assists for her first triple-double as a Wildcat. The native of Hollywood, Florida, was three steal shy of a quadruple-double, registering a team-high seven steals versus FNU. McClain used 16 points and 15 rebounds to record her first double-double of the season and the second of her JWU career. The product of Ft. Lauderdale, finished the night shooting 7-of-15 from the floor and was 2-of-3 from the charity stripe.

The Wildcats ended the contest, shooting 38.7 percent (29-of-75) from the floor while Florida National converted 19-of-54 shots from the field (35.2 percent). JWU out rebounded FNU, 49-44, and forced 30 Conquistador turnovers, resulting in 27 points for the Wildcats.

JWU jumped out to a big lead in the first quarter, holding FNU to just three made baskets in the first stanza. The Wildcats held a 21-7 advantage after 10 minutes. The Conquistador battled back in both the second and third quarters to pull within two points early in the final frame. However, JWU used a 10-run to take a comfortable lead capped off by a layup by Ayulo with 5:45 left to play in the game. JWU maintained its double-digit lead for the remainder of the contest, resulting in the 14-point victory.

The Wildcats won the rebounding margin as well, out-rebounding FNU 44-41.

The Wildcats ended the contest, shooting 38.7 percent (29-of-75) from the floor while Florida National converted 19-of-54 shots from the field (35.2 percent). JWU out rebounded FNU, 49-44, and forced 30 Conquistador turnovers, resulting in 27 points for the Wildcats.

ON THE HORIZON: Lady Conquistadors will play the next game against St. Thomas University tomorrow, November 8th, at 7:00 PM on Miami Gardens, FL.