As part of its mission, Florida National University is privileged to enrich the Hispanic community by presenting an extraordinary Cuban artist.

Damien Cruz was born and raised in Havana. He currently lives and works in Miami, Florida where he received the honor of being selected by the Florida governor as the featured artist for the 2011 National Hispanic Heritage Month Celebration in Florida. Damien participated in two simultaneous exhibitions at the State Capitol Rotunda and the Governor’s Mansion in Tallahassee. He is also a featured artist in Miami Talent Magazine and was recently selected to paint for the Heineken Art Crawl Festival. As a young teenager, he was accepted at the prestigious San Alejandro Academy of Fine Arts in Havana and that’s where the journey began…“In my Paintings I reflect my experiences and my emotions. In most cases the subject matter is based on both my memories of Cuban landscapes and my imagination.  The present collection is a sample of works created over the past several years.”

With a combination of three themes, the exhibition seeks to enlighten the community by displaying a series of paintings that examine human values through a profound use of lines, colors, and light. 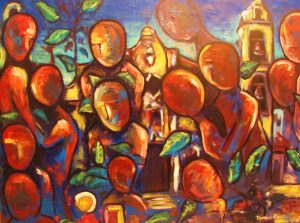 In this exhibition, Damien’s brushwork leaves a mindful hallmark in our thoughts. He pulls us into a circle of resonant reflections that immediately draws us into a captivating saga of human emotions.