FNUNewsThe Definition of an FNU Mother 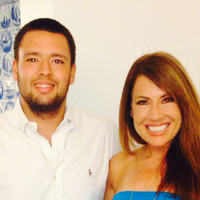 Although Florida National University’s premier athletic team, the Conquistadors, is relatively new within college sports, the dedication of the players and their family has been unbelievable. To demonstrate the gratitude each player and their respective families have for one another, we caught up with Heather Beard, mother of Bruce Evan Moorman, who is the Conquistador’s Shooting Guard.

Mrs. Beard’s interest in her son’s athletic career was apparent after she provided holiday meals to all the players this past season. Simply put, this is a mother who puts her son’s needs before her own and is willing to do whatever it takes to help him be successful, academically and athletically. Having mothers like Mrs. Beard around to provide support makes us hopeful that the team will only continue to strive for success.

How long have you supported your son’s athletic goals?

I have supported Evan’s athletic goals since the first time he picked up a basketball.  He was 4 years old and was pretty good at dribbling for his age.  He played and excelled at other sports growing up, but basketball was always his favorite and it seemed to come natural for him.

What role has sports played in your son’s life?

Sports have been one of the main components in Evan’s life.  If he is not playing basketball, he is watching a game on TV or studying stats on the Internet.

What other initiatives have you pursued in the past to support your son’s participation in sports?

My family and I have been huge supporters of Evan since day one.  Whether we were going across the U.S. for an AAU game or across town to watch a school game, we were always there.

What compelled you to make holiday meals for the players? Have you done this before?

This past Thanksgiving was the first time Evan’s been away for the holidays.  I could not bear the thought of him not having a Thanksgiving.  My family and I came up with the idea to send the whole team a meal since most of the players were not going to be able to spend Thanksgiving with their families.

What are your son’s goals for his athletic career?

Evan’s athletic goal is to continue to play college basketball and be the best he can be at it.  He wants to earn his bachelor’s degree and get a job in something basketball or sports related (of course).

What role do you believe a parent plays in their child’s athletic career?

I believe a parent plays a huge role in a child’s athletic career.  I have taken Evan to more practices and games than I would like to count.  I would not have had it any other way. As long as Evan showed interest, I was there to help him. I believe it’s also important for parents to stress the importance of a good balance between sports and academics as without one you cannot have the other.

What has made you support your son’s academic endeavors and placed them ahead of all other needs?

I have always taught Evan that grades come before basketball.  However, studying does not come as natural to Evan as basketball does.  He has to work for every good grade he gets.  He knows he has to make the grades to play.  That’s what motivates him.

What is the philosophy you have tried to instill in your son concerning values and responsibilities?

My father (Evan’s grandfather) is one of the best men I know.  He was and is a huge supporter of Evan and his basketball career.  I wish I could take all the credit, but I know that Evan has learned so much on how to be a wonderful man from him.

What is the best advice you can provide to any parent concerning their children’s goals and the role parents should play?

I am no parenting expert, but my advice would be to help your children establish realistic goals and expectations — then do everything in your power to help them reach those goals.  Whether it is taking them to what seems like 5,000 practices, staying up with them until the wee hours of the morning to study for a test, or driving them across the U.S. for an AAU basketball game, we only get a few precious years with our children, so make them count.