Douglas Conrado visited Florida National University (FNU), with a big smile on his face, reminisced, and shared his personal story of his journey from a Dental Technician student to being the owner of a dental clinic!

He humbly shares that he did not have a car, thus every day he rode his bicycle to get to work.

At the time, one of his aunts was taking a class at Florida National University; and this is what inspired him to go look at what classes were available and offered at FNU.  Douglas wanted to explore his educational options, and see what he too could possibly study.   He worked very hard as a maintenance man and wanted to study a profession that could provide him a better future.  He remembers looking at, and considering various careers, however, since he was always good with his hands, he was very interested in learning more about Dental Technology.  He chose the Dental Technology career, and sincerely felt it was the best fit for him.  This was an important moment in his life, as he made his decision to pursue his higher education, took the plunge, applied, received financial aid, enrolled, and started his classes for his new career!

He remembers that he looked at the distance between his home and school, and knew he would have to ride his bike to school, as he rode his bike to work.  He was ready for hard work and long days.  Douglas recalls that he met the FNU owners, Dr. and Mrs. Regueiro, and some of their team, including Professor Mauricio Restrepo and Ms. Bertica.  They became his new family.  It was Ms. Bertica who would see him arrive to school in his bicycle, and shares how one day “she endearingly named and baptized me with the name Challenger.”  From that moment on, all his classmates and everyone at the school called him “the Challenger.”

As he reminisced, Douglas said “sometimes I arrived to school immediately following a very hard day of work, and would have paint on my pants and arms, to the point that some of my classmates would ask me where are you coming from?”  He would tell them that he was coming from work, and that he was always ready to work hard, study, and prepare for a brighter future.  He would proudly tell them, yes, I am coming straight from work on my bicycle, and I am studying hard because I want to better opportunities.

As a student, he visited various dental laboratories, and seemed to always get rejected.   Many of the dental labs he visited did not have time to “waste to teach and mentor anyone.”  Until one day that he found someone who listened to him, and took interest.  That special persona was Mr. Michael Thomas, from Coral Dental, who received me as an appurtenance, took me under his wing, and showed me the all of the aspects of working in a Dental Lab.  As I studied, I learned everything I could possibly learn from him and eventually, started working for him.

Two months before my Dental Lab Technician graduation, Mr. Peter Chuch, the owner of another dental laboratory was looking for a dental tech, with the skills and knowledge to work for him.  After having knocked on numerous doors, this opportunity helped him start his professional career as a dental tech, as Mr Chuch hired him.  Douglas made models and deliveries.  He remembers his first full time check that he received was in 1993 for $215.00.

Fast-forwarding to the present, Douglas has now been the owner of my own dental lab for 15 years!  “I worked and studied hard, learned the trade, and started my business small out of my house.   He kept the casting machine in a storage room.  He made metal frames for metal partials.  Gradually by word of mouth, news that he was supplying dentist with good quality work; and within one month, he had a full load of work.  He rented a location to officially launch his business.

Douglas shared, “I asked myself why should I limit myself and make metals only, when I know everything?”  Started little by little buying the necessary machinery and equipment to start my own dental laboratory.  He chuckles as he remembers that for the list of prices, he would have to go to the public library, as he did not have a computer.  “My invoices were the very simple, from the invoice books sold by Kmart” Douglas sighs how times have changed.  Oh, yes, how things have changed!  “Now I have the computers and software’s that generate the invoices, etc.”

As a Dental Lab owner, Douglas likes giving back, and likes to help young students learn from him.  He remembers his mentors who provided this special opportunity to him, and now it is his turn to have apprentices under him, which will be the Dental Techs of the future.

Douglas often tells his young dental techs and students, study hard, learn what you need to learn, so that ultimately face dentists, you are able to have the knowledge to understand them, and answer them professionally.  He continues by saying, “it is by how you answer the Dentist questions that the dentists will immediately know and recognize what you know.  Oh, and they (dentist) will sometimes test you to see what and how much you know!  If you pass their test, they will start giving dental work to you.  In addition, if the dentist does not call you after suppling them with the finished product, that means that everything is good.  When they continue sending you work, means they are happy with your work.  Success is when the dentist who you are working for tell other dentists about you, and your work; and you start to receive calls from more and more dentists who have been referred to you by the quality of your work.

Lastly, Douglas states how technology and science have advanced tremendously!  How many of the things that use to be done manually, are now done by machines However, there is still a need and demand for knowledgeable, well trained, and skilled Dental Technologist. He proudly says that learning is lifelong obligation, and we must always keep learning.

Douglas Conrado is the owner of Doumar Dental Lab.  He chose the name “Doumar” as it is the combination his and his wife’s names: Douglas and Maria, hence Doumar. 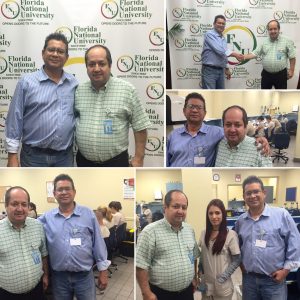