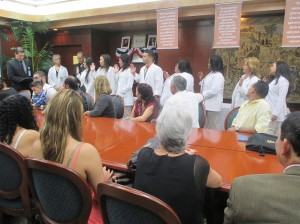 On Wednesday, August 20th, 2014, Florida National University’s Respiratory Therapy Department hosted the pinning ceremony for graduating class number 8. The ceremony took place in the Hialeah Campus of Florida National University (FNU). Three members of the graduating class were also inducted into The Lambda Beta Society: The National Honor Society for the Profession of Respiratory Care. Once a year someone who renders great service to the profession is inducted as an honorary member. This year, our first, the honoree was Ms. Cary Noa, FNU Assistant to the Allied Health Division and Academic Advisor 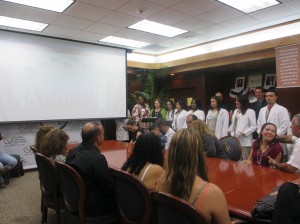 On the request of one of the graduates, who had been moved by a lecture given by Mrs. Mikki Thompson, Director of the Respiratory Therapy Department at South Miami Hospital, Mrs. Thompson was asked to perform the induction which she graciously agreed to do. Mikki is one of two Florida delegates to the American Association for Respiratory Care Congress and a key figure in the field not only in our area but in Tallahassee and in Washington DC.

The Keynote speaker for the ceremony was Mr. Adrian Correa, morning supervisor at 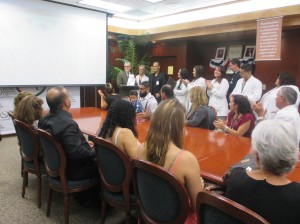 Hialeah Hospital and therapist in charge of pulmonary function testing and neonatology care. Both Mikki and Adrian play key roles in the hiring of many of our graduates. They are also longtime friends and it was an honor to have them with us. Prior to the ceremony both Mikki and Adrian were given a tour of the respiratory laboratory and classrooms.

The Hialeah Campus’s Golden Room was filled to capacity with family and friends of our graduates. It was a pleasure to see the people that have provided our graduates with the moral support required to study while working fulltime.

One of the highlights of the ceremony was when Ms. Anny Morales was given her graduation socks. Anny was always wearing funky socks while in the program, and we could tell by the type of sock she wore each day how the entire class was evolving.

The ceremony concluded with a slide show presentation put together by Anny Morales depicting the funny and not so funny moments of her group while in the library, the classrooms, or the clinical setting. The last slide was particularly moving; it showed the entire group waiving adieu while Anny’s voice expressed her sentiments and admiration for her peers.