Human Trafficking is becoming a prevalent concern on the global, national, and local level.  According to the U.S. Department of Homeland Security, “Human trafficking is a form of modern-day slavery, and involves the use of force, fraud, or coercion to exploit human beings for some type of labor or commercial sex purpose. Every year, millions of men, women, and children worldwide—including in the United States—are victims of human trafficking. Victims are often lured with false promises of well-paying jobs or are manipulated by people they trust, but instead are forced or coerced into prostitution, domestic servitude, farm or factory labor, or other types of forced labor.”

As a supplement to Florida National University’s Human Trafficking Awareness Symposium: Prevention, Apprehension and Rehabilitation (which was held on Thursday, October 8th, 2015), the U.S. Department of Homeland Security released the following presentation. It is intended to to help raise awareness on the issue of Human Trafficking and what citizens can do to identify and report instances of human trafficking.

To view the presentation, please click on Identifying Human Trafficking

If you know or suspect human trafficking in your area, please contact: 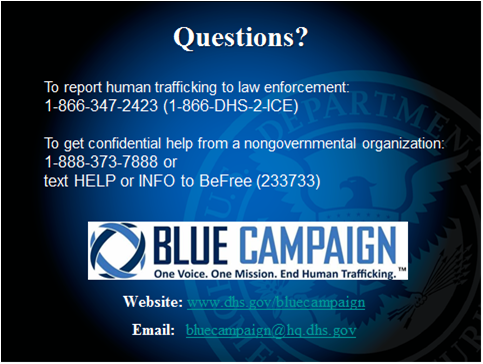