During her time at Coral Shores, she led the county in kills, aces, and digs which routed her in being named the Monroe County Player of the Year in her junior season. In her senior year, she averaged 5 aces, 10 kills, 1.5 blocks, and 9 assists per game and was selected to The Citizen’s 2015 All-Monroe County Prep Volleyball Team. Helphrey will enter FNU pursuing a degree in Criminal Justice in the fall.

“Melissa is a competitor and very passionate about volleyball. She has been playing volleyball from a young age and will bring her knowledge to our team. We are very excited to add Helphrey to our program! We feel she will play an important role in our rotation” said Coach Huaroto-Luque. 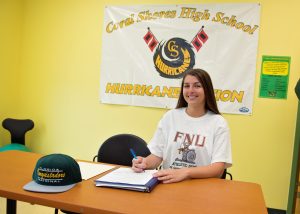