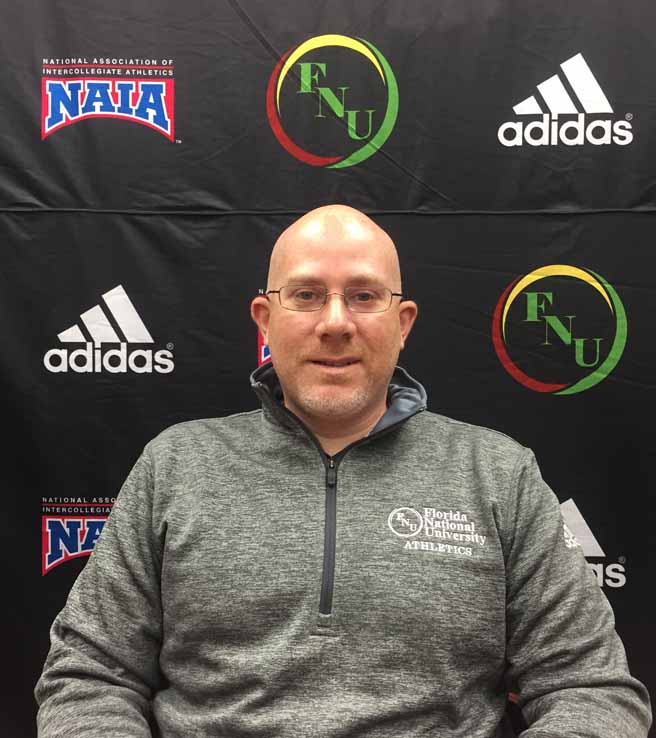 Matt Stearsman has been selected to start the Women’s Basketball Program at Florida National University.

“I am so excited for this opportunity. To start a program from scratch has always been a dream of mine. I want to thank Dr. Regueiro and Coach Fernando Valenzuela for showing their confidence in me to start this program. I also want to thank Coach Paul Godoy and Coach JJ Thatcher who I also met with during the hiring process. Our goal will be to graduate student-athletes who will be positive figures in their communities and to be competitive on a national level.”

Stearsman comes to Florida National University from Young Harris College in Georgia where he was been the head coach for the past three and a half seasons. Under Stearsman’s guidance, Young Harris was ranked in the top 20 in NCAA Division II statistics in scoring defense for two seasons. Stearsman also led the Mountain Lions to their only win versus an NCAA Division I opponent. While at Young Harris Stearsman coached 3 Peach Belt All-Conference players and 13 members of the Peach Belt All-Academic team. The Mountain Lions had a team GPA of 3.20 during Stearsman’s tenure.

Stearsman joined the Mountain Lions in 2012 initially as an assistant coach after spending two seasons as a member of the Gannon University men’s basketball staff. He arrived in Erie, Pennsylvania, before the 2010-11 campaign after serving as the associate men’s head coach at St. Catharine College the previous two seasons. In 2009-10, he helped produce the best turnaround in the country as St. Catharine posted a 21-11 record. Five of those victories came against top 25 teams. The 21 overall wins came one year after the program won only five games in 2008-09. Patriot players earned all-conference honors five times during his two seasons on the staff.

Before his stint at St. Catharine, Stearsman was a men’s assistant coach for one season (2007-08) at Georgia Southwestern State University and two seasons (2005-07) at Oklahoma City University. He helped Oklahoma City produce a 64-10 record during that two-year span. The Stars advanced to back-to-back NAIA national championship games, winning the national title at 2007. The program finished No. 1 in the final 2007 national rankings and No. 7 in the final 2006 poll. At Oklahoma City, he was able to tutor NAIA All-America third-team members Nick Covington (2007) and Dawud Drew (2006).

A Mortons Gap, Kentucky, native, Stearsman is a 2001 graduate of Hopkins County Central and a 2006 graduate of Oklahoma City with a bachelor’s degree in English.