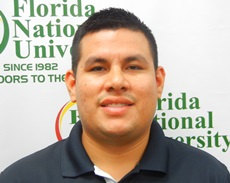 Carlos Huaroto-Luque comes to Florida National University (FNU) by way of Westminster Christian School in Miami, FL. He spent three seasons as an assistant coach under head coach Julie Doan Kurenuma. During his stint at WCS, the warriors made the Florida High School State Tournament three consecutive years. During 2011, they finished in the semi-finals. In 2012, they ended as state runner-ups. Finally, in 2013, they finished strong as Florida High School Girls Volleyball State Champions.

Huaroto-Luque also coached four years at Miami Elite, one of the top club volleyball programs in South Florida. In the 2014-2015 club season, his 15-and-under team finished as one of the top 10 teams in the state.

Huaroto-Luque graduated from Miami-Dade College of Education in 2010 with a Bachelor’s degree in Secondary Mathematics. He has been a teacher for the past four years at Keys Gate Charter High and G. Holmes Braddock, respectively.

“It is my pleasure as the Athletic Director of Florida National University to name Carlos Huaroto-Luque as the first ever Women’s Volleyball Coach here at Florida National University,” stated FNU’s Athletic Director, Scott Schmidt. “Coach Huaroto-Luque brings a vast level of knowledge of volleyball and his experience will play a key role in establishing a successful volleyball program here at FNU.”

Schmidt also said, “Carlos personifies the qualities, values and characteristics we are working to establish within Conquistador Athletics.”