FNUAdvisingWhat are the Signs of Domestic and Teen Dating Violence? [Video]

Domestic violence. It’s a real crime that happens far too frequently than it should. One act of crime is one too many and it’s one that The FNU Powerhouse accompanied with Dr. Jose Reguiero Foundation aims to combat and prevent.

What is FNU Powerhouse About?

The purpose of the FNU Powerhouse is to educate children, teens as well as adults about the many maladies of crime such as human trafficking, missing children, domestic and teen dating violence. The FNU Powerhouse’s initiative is to reach out to the youth in particular to educate them about the many indicators that perpetrators of violence are constantly using to control their victims. It is our strong belief that by bringing this kind of awareness to students in the Miami Dade public schools and private institutions, we can help reduce the amount of domestic and teen dating offenses that occur.

The Rally to Support the Cause

This past Thursday, October 12 at the Florida National University Campus, 4425 W. 20th Avenue, Hialeah, Florida, marked the Second Annual Awareness and Prevention Rally of the Many Faces of Domestic and Teen Dating Violence.

“We’re trying to bring awareness to everyone in the South Florida area about how these kind of offenders control their victims.” Dr. Maria Reguiero, President and CEO of Florida National University said. “We want to empower people with information that will help save lives.”

Students will be able to see the signs and end the unhealthy relationship, or if they’re already involved, they’ll know what they can do to get the assistance to escape. Furthermore, FNU Powerhouse hopes to even prevent someone from becoming an offender.

These are just some of the topics that the FNU Powerhouse initiative discusses at these rallies. 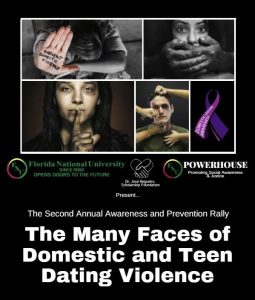 Other Domestic Abuse Awareness Rallies Held Throughout the Year

This October’s event shines the light on The Many Faces of Domestic and Teen Violence, all structured on how to save the lives of children, teens, and even the family as a

How Others May Be Affected by Domestic Abuse

While domestic violence starts with a relationship between two people, others can also be affected. FNU Powerhouse would also like to bring to light that all victims aren’t women either. Domestic violence and teen dating violence does not discriminate. There is no preference and there aren’t any rules to how such crimes are committed. The relationship can be between a man and a woman, but it can also be between two men, two women and even affect those who are in direct relationship with them whether it’s by way of family relation or friendship with neglect or physical and emotional abuse. Domestic violence doesn’t discriminate against social or economic status. Anyone can suffer from such abuse.

It’s clear that these statistics reflect an immeasurable amount of lives and families who have been emotionally, mentally, and physically affected by such despicable acts of crime. 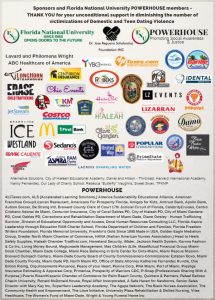 FNU Powerhouse’s mission is to eradicate such societal horrors in the South Florida community. By promoting rallies like The Many Faces of Domestic and Teen Dating Violence along with the support of solid professionals that are movers and shakers in the Miami Dade County and beyond, FNU Powerhouse is certain that children, teens, parents, educators, and the community will be empowered to combat this and steer clear of the path that is domestic violence.

It Takes a Village—or a Community 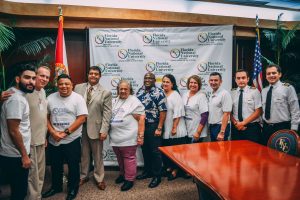 Domestic violence is real and it must be stopped. FNU Powerhouse encourages anyone who might be a victim to get connected and get help! If you think you’re a victim of domestic violence, call your local police department.

For further information and resources about domestic violence, call the National Domestic Violence Hotline at 1-800-799-7233.

How You Can Help Support the Cause

If you want to volunteer at FNU Powerhouse, contact the Florida National University Dean’s Office at 305-821-3333.