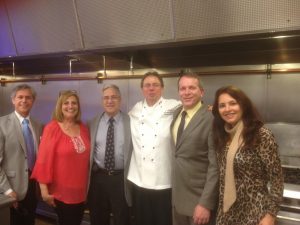 The “Chef’s Table” luncheon which was held in the kitchen of the Hyatt Regency Hotel in the Miami Convention Center was hosted by the United Cerebral Palsy of South Florida. Attendees were treated to a special five-course meal prepared by Executive Chef Michael Morris whose wife is greatly involved with the Cerebral Palsy Foundation.