Motivation, determination, goal-setting and hard work: time and again we hear from successful individuals that these are the needed items for a recipe for success. Nevertheless, there will be challenges along the way, and we all know how difficult it can be to stay the course when unexpected hurdles appear upon our various life paths. But, as the saying goes: when the going gets tough, the tough get going. Sometimes it helps to know that it is possible to stay upbeat, believe in oneself, and succeed even in the face of difficulties – and it is especially useful to hear this from those who have been there.

Coming to America: Challenge and Opportunity 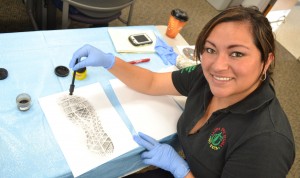 Many of us who come from a background of struggles, poverty, or immigration know how many factors can conspire to make life seem an arduous task. “It was a long journey,” says FNU graduate Mearli Orozco. As a native of Guatemala who came to the United States as a teenager, “my first four years in this country were the most challenging I’ve experienced in my life thus far.”

Orozco’s mother had come to the United States to pursue a better life for herself and her family, but could not bring her daughter along. When her mother was finally able to bring Orozco to the United States, “I had a daunting task in front of me – adapt to a new culture, new language, and new friends.” Orozco faced a situation so many young people face upon arriving in a new country. “To make matters worse, I was being bullied by my math teacher and classmates because I didn’t speak English. I’d cry everyday trying to fit in while missing my friends back home.”

Determination and Motivation: Fuel for the Fire of Advancement

Despite the challenges she faced as a new arrival to her adopted country, Orozco, like her mother before her, was determined to move onward and upward with life. She managed to improve her English, graduate from high school and enroll in college. While the path to graduation day was not a straight shot, Orozco did make it there. “FNU changed my life,” she now says. In a previous attempt at higher education, she struggled with advancing her English language skills and feeling capable of academic progress. “FNU focused more on getting students committed to earning a degree by limiting the number of remedial courses and reinforcing structure in their core courses. For the first time in my life I felt like I was doing something productive with my life.”

Ultimately, Orozco’s hard work and determination has paid off in spades. Not only did she complete an Associate’s Degree with a 3.8 grade point average, she enrolled in a Bachelor’s program. Throughout her educational and professional path, “I wanted to be an example for others; and I also wanted to make my mother proud and show her that her efforts of bringing me to the U.S. were valuable to me,” she says. There is no doubt that she has done so.

During and after her Bachelor’s program of studies, Orozco involved herself wholeheartedly in many community and university activities. For example, she took part in the Criminal Justice Honor Society at FNU, through which she attended trainings within her program as well as several community service activities. In addition, she collaborated with community agencies to assist in projects including working with children of incarcerated parents, anti-bullying programs, and awareness projects against domestic violence in the lesbian, gay, bisexual, and transgender (LGBT) communities.

In recognition of her numerous and valuable contributions to both her academic institution and the community as a whole, FNU honored Orozco’s hard work and dedication with a scholarship that allowed her to continue achieving academic excellence and community involvement. She completed her Bachelor’s Degree in Criminal Justice in the summer of 2012, and she intends to continue her education with a Master of Business Administration at FNU.

As we challenge ourselves, so we present ourselves with opportunities for growth. This certainly was the case for Orozco, and it is a sentiment echoed by FNU graduate Yusnier Gutierrez. “I believe that by working hard, and with dedication and persistence I can overcome any obstacle. All these experiences have helped me pursue my goal of obtaining a university degree.” Gutierrez, who came to the United States from Havana, Cuba at the age of 7, says that his mother instilled in him a sense of hope and determination – “to never give up on my dreams.” It is a philosophy that served him well as he worked diligently to accomplish his Bachelor of Science in Criminal Justice. “For me, working towards a goal and achieving it is the most important thing regardless of the money that a person can earn.” 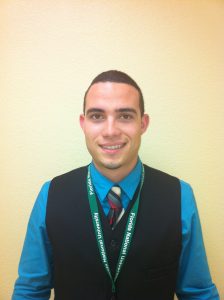 As both a student and Student Services staff member at FNU, Edwin Perez is a testament to the power of education. “Now I am working as a staff member at FNU, and I can tell you that since I have been involved with FNU for more than four years now, it is a university with limitless opportunities.” His academic growth has furthered his professional development; Perez is able to draw upon his personal experiences to help other students reach their goals. FNU “can help you prepare for a bright future,” he adds. “I can personally attest to this…being a student and employee of Florida National University has been a very enriching and rewarding experience for me.”

Olga Garcia-Quin earned her Associate’s Degree in paralegal, which paved the way for a successful career working with legal professionals. She also has a strong role in the community as an advocate for social improvements, running for town council and applying her experience, abilities and knowledge to give back to the community. Garcia-Quin saw the tangible benefits her education provided for her career trajectory and decided to continue working towards her Bachelor’s Degree in Legal Studies at FNU.

If you are reading this, then surely you too are considering advancing your own personal, academic and/or professional goals. FNU believes in the power of each individual to reach his or her highest potential, and works with each student to get there. Explore everything that you can achieve and all that you can become – contact a career and academic counselor at FNU to start writing your own success story today!