FNUFNU AthleticsCONQUISTADORS SUFFER LOSS IN LAST GAME OF THE SEASON 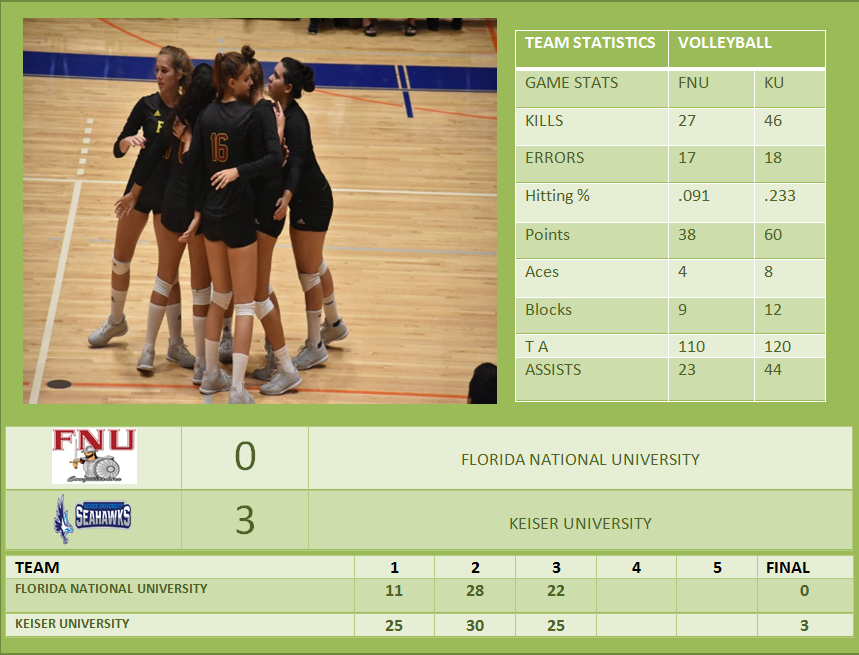 1st set | The Conquistadors won the opening two points of the set but rebounded with six consecutive, highlighted by three kills from Seward to lead 6-2. Keiser pushed their lead to the largest of the set, 18-6, but FNU trimmed it back down to single digits at 19-10. However, KU closed the set on a 6-1 run to come away with the 25-11 victory.

2nd set | Florida National jumped out to a 6-1 advantage before a Seward kill started a 4-0 run to get within 6-5. The Seahawks remained behind until a big kill from Seward put KU in front for the first time in the set at 17-16. The teams then battled through three ties with FNU holding a point advantage until the Conquistadors had match point, leading 24-22. Faryn Salazar and Seward then recorded back-to-back kills to equalize the set at 24-apiece. Each team had two set point opportunities but were unable to take the set with the score now tied at 28-28. Seward followed with a kill and an assisted block from Eshe Malone and VandeHei lifted Keiser to the thrilling 30-28 victory and a 2-0 lead in the match.

3rd set | Keiser raced out to a 5-1 lead and stretched the margin to a set-best seven, 14-7. Florida National wouldn’t go away as they continued to battle and tied the score up at 16-16. The Seahawks jumped back in front by two but the set would be tied one last time at 19-19. Keiser would then go on a 5-1 spurt to set up match point, leading 24-20. FNU grabbed the next two points but Malone ended the match with a big kill, winning 25-22.

ON THE HORIZON: Lady Conquistadors next meeting will be the USCAA National Championship at Virginia Beach Field House.