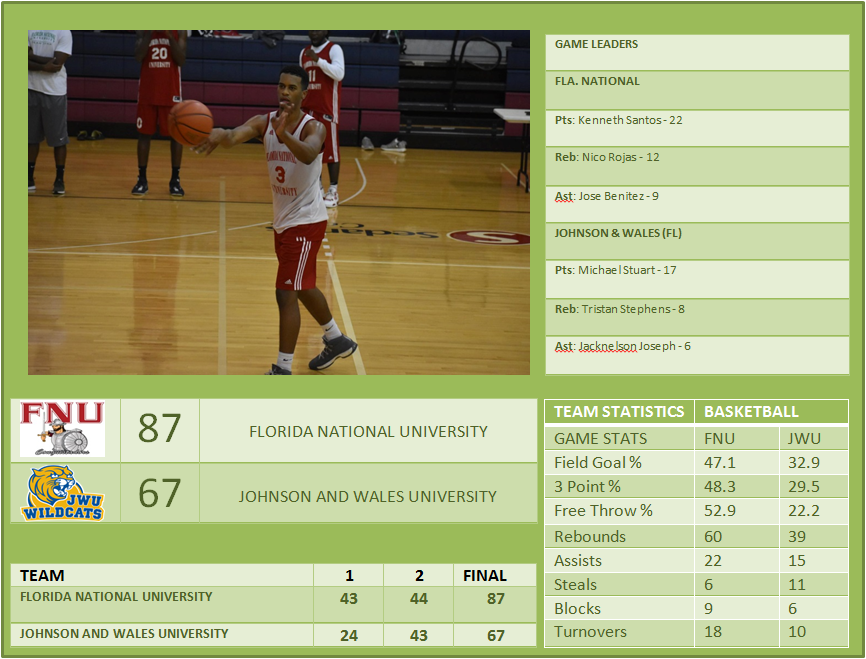 Despite four Wildcats scoring in double-figures, the Johnson & Wales (Fla.) men’s basketball team (0-3) fell to the Florida National Conquistadors (3-3), 87-67, on Tuesday night at the Wildcat Center.

The Wildcats struggled in the first half, shooting just 27.0 percent from the floor. FNU drained 16-of-33 shots (48.5 percent) in the first 20 minutes to take a 19-point lead into the break. The Wildcats kept pace with the Conquistadors in the second half but, could not overcome the slow start.

JWU was led by junior Michael Stuart, who posted 17 points on 6-of-13 shooting from the floor, including 5-of-10 from 3-point range. Freshman Dwayne Adams added 14 points going 6-of-12 from the floor. The native of Miami also grabbed six boards. Senior Jacknelson Joseph poured in 13 points while junior Sidney Alcena contributed 11. Joseph produced a team-best six assists versus FNU. Freshman Tristan Stephens tallied a team-high eight rebounds.

The Conquistadors won the rebounding margin as well, out-rebounding JWU 60-39.

ON THE HORIZON: Conquistadors will play the next game against Warner University on November 10th, at 7:00 PM at Bucky Dent Gym in Hialeah, FL.