HIALEAH, FL- Mauricio Restrepo is a natural born storyteller. At the age of 14, he wrote a short story and submitted it to a contest in Latin America, not expecting any response. “I sent it by mail, never cared about it, and they told me that I had won. I never paid attention to it because I was young.” He later found himself telling children in his family ghost stories passed down from his grandmother. An avid reader, Mauricio has always been fond of literature and writing. Restrepo could not have predicted the success that he would find later in life with his “hobby,” as he affectionately refers to it.

He recently published his newest novel, El Duende. Translated from the original Spanish, Restrepo provides a brief description that entices one to read the story: “The Elf story, as presented in this book, is based on the stories that our grandmothers told us when we were kids. It is a rural legend, our folklore, with a very simple and brief language, in which the elf was the villain, was always victorious. It was an abominable and frightening character, which produced chills in us and indirectly served as admonition and corrective behavior. However, like our grandparents, and many other treasures of our traditions that have lost their validity with the passing of the years, the elf began to disappear, to almost be forgotten. With this book not only do I relive in present time this mythical character of our Hispanic-American culture, but also I locate geographically in the place where I lived and enjoyed my childhood, I give a source, an identity, a place in history and a voice with his version of events. In the end, if we could call it that, I give the outcome I always wanted for him in my dreams, or rather nightmares for the elf was featured in my childhood.” 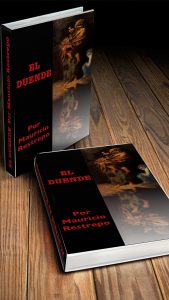 This is the second novel that he has written, after his first publication Angel infernal. He has taken in this novel one of the ghost stories passed down from his grandmother and crafted it into a story of his very own, giving the main character an origin story and an ending. Restrepo often takes elements from his own life and weaves them into his stories. For instance, in his first book he used his sister’s likeness, both in physical and personality, as a main character. It brings personal and relatable elements to his works.

During the day, Restrepo is the longest standing faculty member at Florida National University. “It seems like he (Dr. Jose Regueiro) always had a plan for me,” says Restrepo. He began as Dr. Regueiro’s student, and was taken under the university founder’s wing. Coming from a family of jewelers, Restrepo found himself naturally talented at dental work, which as he puts it, “is not that different from jewelry making.” Dr. Regueiro asked Restrepo to replace him during the second semester at Florida National University as a professor. This is where he got his start and is now the acting Dental Department Head of the university. His success both in the world of dental labs and fiction writing speaks volumes of his versatility and talents.

Mauricio Restrepo’s novels are available on various websites, including Amazon, Barnes & Noble, Palibrio, and Google Play. His success extends outside of the United States to countries such as Czechoslovakia and Korea, where his novels are also available for purchase. On both Palibrio and Amazon, you may find his new book El Duende for $17.95 in softcover.