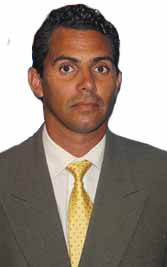 With over 22 years of experience Coach Valenzuela brings an abundance of knowledge, passion and experience to the FNU Soccer program. Before taking over at FNU as the men’s soccer coach, Coach Valenzuela was the Head Coach at Florida Memorial University for the past 8 years. In 2008 he implemented and began the first ever Men’s soccer program at FMU. Four years later, he had 2 double digit win seasons and in 2012 led the team to Conference Champions where they received an automatic bid to the NAIA national tournament making FMU one of the top teams in the Sun Conference and one of the top teams in the nation for the following years to come with a 2014 30th nationally ranking and as high as 18th in the nation in 2015. Now all this was accomplished while having almost next to no athletic scholarships at all and no soccer facilities of their own to play or practice. But amongst all the winning and national rankings his biggest accomplishment was in the classroom where in 2015 he had 15 Academic All Conference men soccer players and in 2014, he had 16 of the men soccer players recognized by the conference while receiving the academic all conference award for having a 3.5 GPA and above. In 2014, they were also the number one soccer team in the nation with an overall average GPA of 3.75.

Before FMU he coached for cross town rival St. Thomas University’s Men’s Soccer team where he also led the STU Bobcats to being ranked 19th in the nation.

On the high school level, he coached for Olympic Heights, Pope John Paul II, and American Heritage Boca/Del Ray also taking them to the highest levels. He also coached at several elite competitive soccer clubs in the south Florida area.

As a player, Mr. Valenzuela has achieved what all young soccer player’s dreams of, playing in college and professional leagues. He went on to be a standout player for NCAA Division 1 Top 20 School, University of South Carolina College of Coastal Carolina. After graduation, Valenzuela moved to his native Argentina after being offered to play professionally for Defensores De Belgrando (Argentine 2nd Division.) and later had a short stint with Club Atletico Independiente (Argentine 1st Division). When he came back to the United States he bounced around in the 90’s and played with different USISL clubs such as Coral Springs Kicks, Boca SABR, Miami Stars, and Ft Lauderdale Strikers.

On top of his duties as the Head Coach of the Conquistadors, Valenzuela is also the Head Soccer Coach for the PDL soccer team “The Floridians FC” he is also still very active in the community coaching at the youth levels for the prestigious AC Delray and FC Florida Youth Clubs.

Valenzuela holds a Bachelors degree in Business Administrations with a Double Major in Finance and Management with a minor in Education and a Webmasters certificate in computer web design as well as a USSF National Coaching License.

He is currently married to former Wendy Kenny and they have three beautiful children, Fernando Antonio, Gerardo Luis and Alexandra Elizabeth, they reside in beautiful Boca Raton Florida.