Mr. Jose Crossier arrived in the United States in 2000 from Cuba.
Realizing that he needed to learn 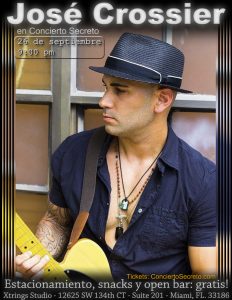 English to be able to achieve his dreams, Jose enrolled in Florida National University’ English as a Second Language (ESL) program. After successfully completing the program, Mr. Crossier enrolled in Florida National University (FNU) as a degree-seeking student and completed his Associate of Science degree in 2004. In 2006 he was part of FNU’s first LPN graduating class. He continued his education in nursing and is now an RN with a BSN. He currently works as a part-time professor in addition to being a nurse.

When Mr. Crossier is not tending to patients or teaching, he dedicates his time to pursuing his second passion which is music. Currently, he has three songs on iTunes, Amazon and Google Market. A talented musician, Jose believes that it is important to pursue a degree and that the pursuit of higher learning should be everyone’s number one priority.

Ultimately, Jose hopes to become an example for all current and future students.